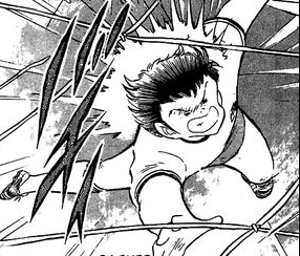 Mitsuru is a japanese midfielder that played for Nishimine Elementary School in the one shot “I am Taro Misaki” (“Boku wa Misaki Taro”), published in 1984. He is usually a subtitute player.

Later on, Mitsuro (and his former teammate Kazuo Kodama) travels to Madrid (Spain) to see Misaki play for Japan at the Olympic Games.