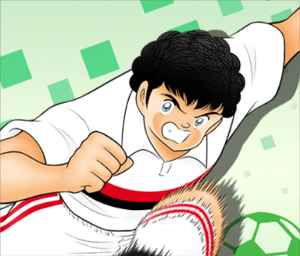 Pepe is a brazilian striker that has played for the different national teams of Brazil (Under 19 and Olympic). He met Tsubasa in the Sao Paulo youth team, where they were teammates. Coming from a poor family, he initially the japanese, thinking he had it easy (coming from a rich country). However, he soon discoverd Tsubasa’s passion for the game and became good friends.

During the World Youth Tourmanment held in Japan, Pepe was often a substitute player. In the final, where Brazil lost to Japan, he came from the bench after haltime. In the Olympic Games Tournament he was a regular in the starting eleven.

Pepe is one of the new characters included in the third DLC of the videogame Captain Tsubasa: Rise of New Champions.