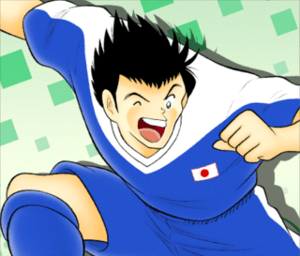 First known as Koji Yoshikawa, his real name is Takashi Sugimoto. He is a midfielder and a member of the Real Japan 7 team.

Sugimoto eventually plays for the japanese national team in a friendly game against New Zealand before the Madrid Olympic Games. He also becomes a pro player at the J-League, where he plays for Gamba Osaka.