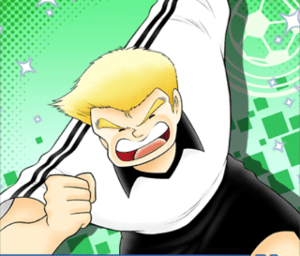 Hermann Kaltz is a german defensive midfielder, nicknamed “The Workman”. He used to be teammate of Genzo Wakabayashi and Karl Heinz Schneider at Hamburg Youth, but the latter left to Bayern Munich. Kaltz was really hurt for his friend departure, and out of anger got ejected from a match for kicking Schneider.

Hermann Kaltz is a tricky player with multiple skills, who can defend, score and assist. He is a starter for the different german national teams (U15, U19 and Olympic).