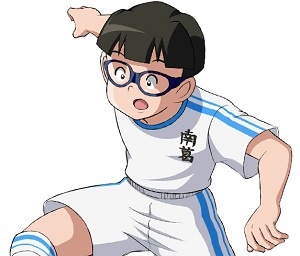 Manabu Okawa, also known in occident as Arthur, is a defender from the region of Shizuoka that played for Nankatsu Elementary School and Nankatsu Middle School, with Tsubasa Ozora.

During the Middle School Tournament (and the regional qualifiers) Manabu did not play a single game, acting mostly as a supporter from the bench.