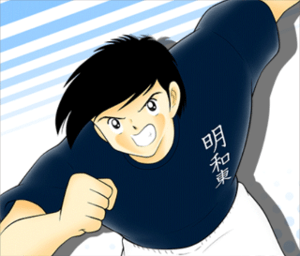 Noburo Sawaki, also known in occident as Keal (or Keith, Sam or Armand) Coleman (or Coldman), is a japanese striker that plays for Meiwa. In elementary school he partners at forward with Kojiro Hyuga, but when the latter goes to Toho Academy, he assumes the responsability of scoring goals for his team.

He is very energetic and a decent striker (as proven by his selection as one of the best 24 players of the Middle School Tournament), but has never played as a japanese representative. He was invited to the japanese training camp for the International Junior Youth Tournament, but did not make the final cut. His trademark technique is the sliding shot.