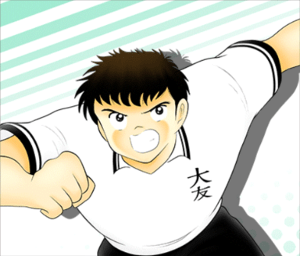 Masao Nakayama, also known in occident as Jill Taylor, is a defender that appears since the beggining of the in Captain Tsubasa series. He used to play for the Nankatsu Selection Team that represents the city of Nankatsu at the Elementary School National Tournament. Later on he joins Otomo Middle School and forms the “Otomo Quartet” with Hanji Urabe, Takeshi Kishida and Koji Nishio.

At high school Masao Nakayama plays for Nankatsu, with Taro Misaki and Ryo Ishizaki. He is called for the training camp of the japanese under 19 team ahead of the World Youth Tournament, but does not make the cut (never actually playing for Japan). After this he does not play any more matches in the manga.