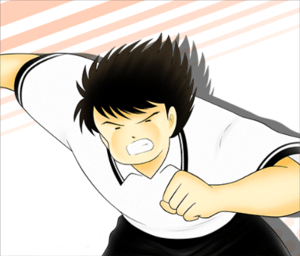 Koji Nishio, also known in occident as Franky Gilbert, is a supporting character in Captain Tsubasa that appears at the beggining of the series. He used to play for the Nankatsu Selection Team that represents the city of Nankatsu at the Elementary School National Tournament, as a defender. During the tournament he gets injured and is replaced by Ryo Ishizaki, who since then gets the starting right back position at Nankatsu.

Later on Koji Nishio joins Otomo Middle School and forms the “Otomo Quartet” with Hanji Urabe, Takeshi Kishida and Masao Nakayama. After losing to Nankatsu at the Shizuoka Regional final, he does not play any more football games in the manga, although sometimes he is seen in the stands supporting his former teammates.