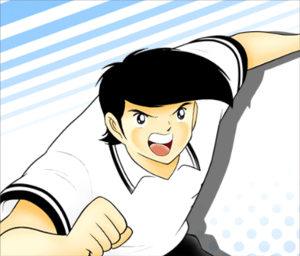 Takeshi Kishida, also known in occident as Charlie Custer, is a supporting character in Captain Tsubasa that appears since the beggining of the series. He is the captain of Yamabuki Elementary School and is the only player from that team that makes it to the Nankatsu Selection Team to represent the city of Nankatsu at the Elementary School National Tournament. He then joins Otomo Middle School and forms the “Otomo Quartet” with Hanji Urabe, Koji Nishio and Masao Nakayama.

Kishida is regularly called for the japanese national teams, where he acts as a back up defender and does not play much. He is the player with the most games played without scoring a goal (or giving an assist) of the Captain Tsubasa series (including goalkeepers). His signature move is the “shark tackle”, where he throws himself head-first to the ball.