Japan vs Germany was the second game of the quarterfinals of the Madrid Olympic Games’ football tournament in Captain Tsubasa. It was played in the Riazor stadium (La Coruña, Spain).

During the first half both goalkeepers managed to keep a clean sheet. Kojira Hyuga put the ball in the back of the net in the 30th minute, but the referee considered that he had fouled germany’s goalkeeper Deuter Muller, and the goal was invalidated.

In the 53rd minute Japan’s defender Yuji Soga was injured and had to be replaced by Ryo Ishizaki. A couple of minutes later Japan opened the scoring thanks to a special “High Speed Tornado Sky Alpha” twin shot by Tsubasa and Taro Misaki, off Ishizaki’s long pass. In the 70th minute Hyuga made a penalty kick that also meant a yellow card for german defender Schweil Teigerbran. After the second goal, the defensive Schmidt brothers were replaced by midfielder Michael Hain and forward Mario Goethe. In the 72th minute Hermann Kaltz injured Ken Wakashimazu, the former getting booked and the latter getting replaced by Shun Nitta. Just three minutes later, Karl Heinz Schneider injured Japan’s goalkeeper Genzo Wakabayashi during a dangerous play. Once again the german got a yellow card and the japanese had to be replaced by Yuzo Morisaki.

Germany took advantage of the inferiority of the new rival goalkeeper, and Schneider managed to score three goals in just eight minutes (78th, 80th, and 86th), getting the lead. One of the goals was assited by Manfred Margus. With the victory at their hands, the germans started to waste time, getting two yellow cards in loss time because of this (Goethe and Felix Max), and making a subtitution in the 96th minute. However, Japan managed to score in the last minute of overtime (98th) thanks to Nitta, who was assited by Hyuga.

For the start of extra time Hiroshi Jito replaced an injured Gakuto Igawa. Japan destroyed Germany in the first half, scoring  three goals in twelve minutes. The first was one more time a twin shot by Tsubasa and Misaki (using the new special technique), the second was Hyuga’s (assisted by Makoto Soda), and the third was Nitta’s. But Germany was able to score one goal before half time, thanks to Kaltz (assisted by Schneider).

In the second half of extra time Schneider managed to score again (minute 111th, asisted by Teigerbran), setting the score 6-5. Kaltz got injured during the end of the game and had to be replaced in the 120th minute. The referee decided to add 6 minutes of loss time, and Japan fought hard to keep the score as it was. In the last minute of the game Tsubasa dribbled from box to box to score the last goal of the match with a super curved shot just before the final whistle. 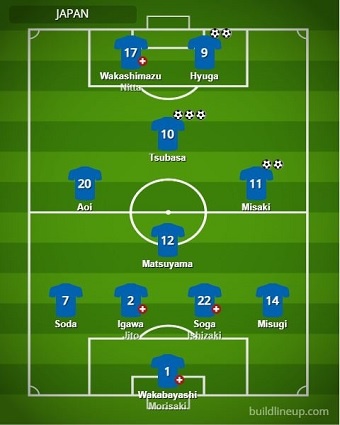 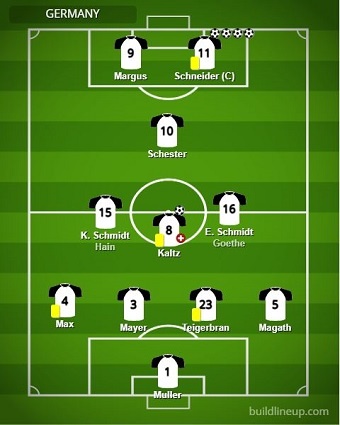